A journey through the history

In 1989, Altötting celebrated 500 years of Madonna pilgrimage. Yet its history goes back even farther.

In 1983/84, in the course of excavations carried out on the Altötting Kapellplatz by archaeologists of the “Bayerische Landesamt für Denkmalpflege” (Bavarian Office for Preservation of Monuments) traces of human settlement were discovered which go back to Neolithic age. But what human beings used to do here, whether it was a place of worship at that time, is not known exactly.

A Roman past as attributed to Altötting by the Bavarian historian Aventinus (Johann Thurmair) remains legendary. In 748, in the early Middle Ages Altötting appears for the very first time in an official historical document under the name “Autingas”, the Latin form of “Ötting”. This proper name originates from Auto or Oto, probably a Bavarian tribe leader, who settled first in this area.

When officially first mentioned, Altötting is already an important town, because it is also the court of Bavarian dukes, the most important residence after Regensburg (Ratisbona). Nearby, a Chapel the octagonal ground plan of which conveys the idea of being a baptismal chapel presumably erected around 700 and its construction is associated with the saint mission bishop Rupertus von Salzburg. A legend tells that firstly he baptized the first Christian Bavarian duke here in Ötting and secondly he brought a Madonna to Ötting.

After the last Agilolfing duke Tassilo III was deprived of his power by Charlemagne in 788, the ancient ducal court of Ötting became a Carolingian royal palatinate. It is proved that several Carolingian emperors and kings stayed here. The heyday, however, for the Ötting Carolingian palatinate was when King Karlmann, great-grandchild of Charlemagne moved his seat of government from Regensburg to Ötting in 865 and ruled from here as King of Bavaria and Italy until he died in 880. 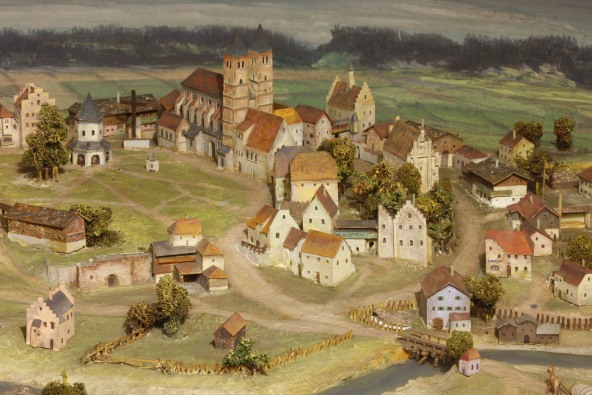 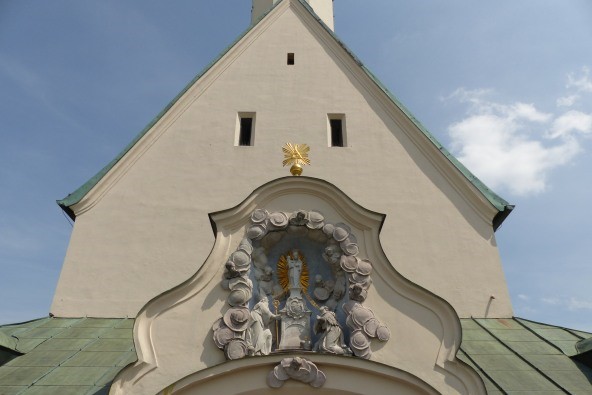 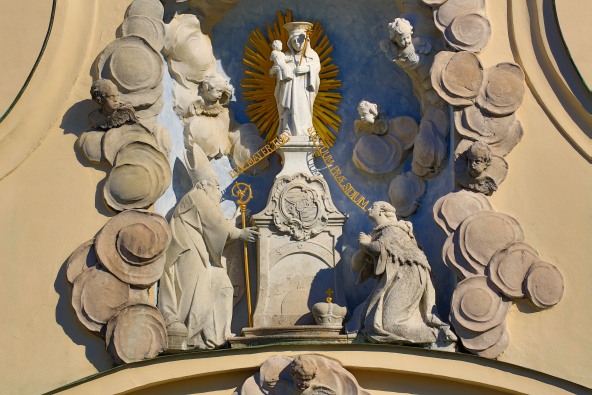 King Karlmann and the Carolingian

Karlmann also erected the monastery which he furnished abundantly and a Basilica to which he endowed relics of the apostle Philippus and where he was buried in 880. In Altötting also the history of the German Carolingians came to an end: Karlmann’s son, Emperor Arnulf of Carinthia, died here on December 8th, 899 and his son Ludwig, called "das Kind” (“the Child”), was born in Ötting in 900 and baptized in the octagonal centre of the chapel. With his death the German line of the Carolingian dynasty came to an end in 911. 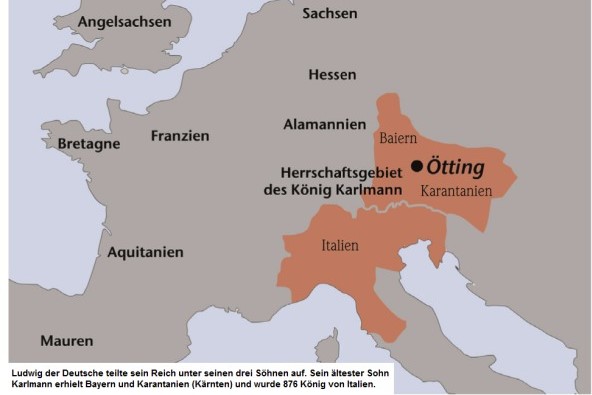 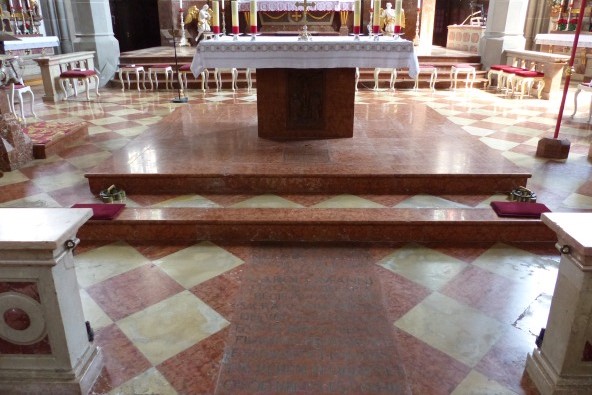 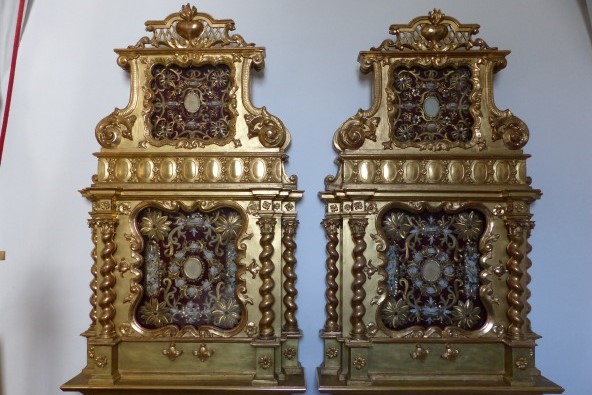 In 907 the Hungarian assault devastated the palatinate, Stift and Basilica. Only the octagon of the baptismal chapel survived the destruction intact.
Only three centuries later, in 1228, the Chorherrenstift is rebuilt by the Wittelsbach duke Ludwig the Kehlheimer. Where once was the Karlmann Basilica he had a new Basilica in roman style erected as a Stiftskirche. 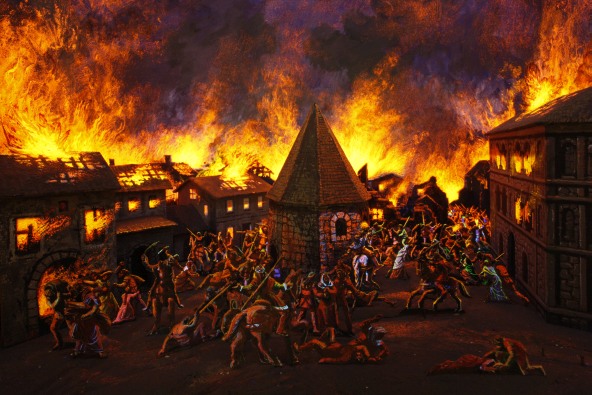 In 1489 pilgrimage to Altötting starts caused by the reports on two sensational healing miracles. Destination of the pilgrimage which soon reunites pilgrims from all over Europe, is a Madonna carved out of lime-wood and located in the octagon of the ancient baptismal chapel which was made at the Upper Rhine or Burgundy about 1300 and came to Altötting in about 1330.

The pilgrims come in large numbers and are far too many for the small chapel and the Roman Stiftskirche. Between 1499 and 1511 where once was the Roman church is nowadays the Gothic Stiftskirche. And also the octagon of the chapel gets a “Langhaus” (nave). 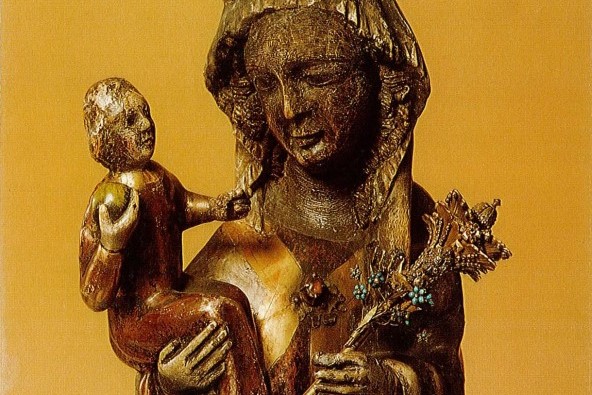 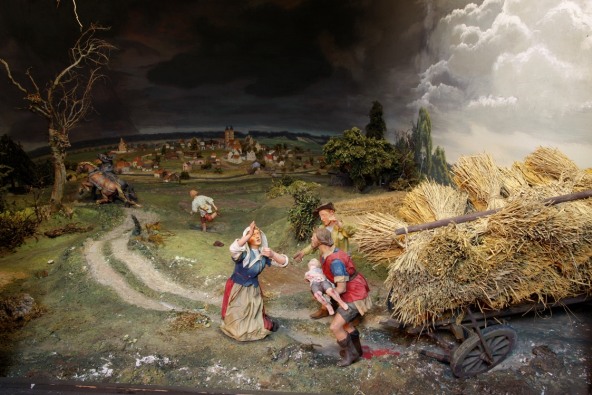 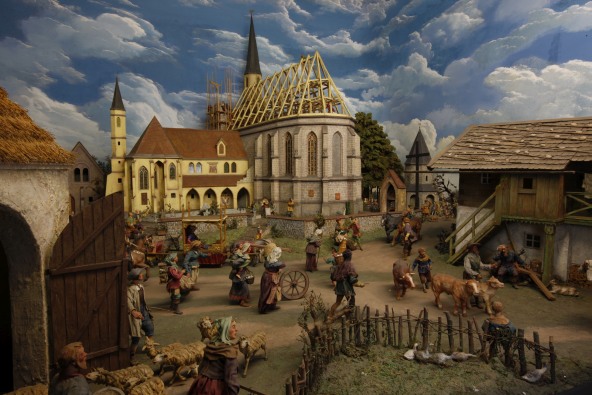 Throughout the centuries Altötting remained the pilgrimage place of the ordinary people, but also gained political significance as the destination and meeting place of “the Great people of the World”. Emperors and kings, dukes and electors and also three Popes came to Altötting as pilgrims, like Pope Jon Paul II in November 1980, and with the last highlight being the visit of the Bavarian Pope Benedict XVI on September 11th 2006. During the 30 years’ War the Bavarian elector Maximilian gave his destiny and his people’s destiny into the hands of the Madonna of Altötting by writing a solemn letter with his own blood. In 1681 the Emperor Leopold I and the Bavarian elector Max Emanuel met in Altötting for prayers and political negotiations and formed the “Altötting Alliance” which two years later became important when the Turks were approaching Vienna. Until the 19th century, the Bavarian sovereigns have their hearts buried in silver urns inside the octagon of the Altötting Chapel as a sign of “ducal guard of honour”.

When the Altötting porter Friar Conrad (Konrad of Parzham) was beatified and canonized in 1930 and 1934, Altötting was given a second popular shrine of pilgrimage besides the Gnadenkapelle: The Tomb of the Saint located in the Kapuzinerkirche St. Konrad (Capuchin Church). Nowadays about 1 million pilgrims per year visit Altötting.